The famous white rooftops of Bermuda

White rooftops that collect drinking water, gorgeous pink sand beaches, and more golf courses per square mile than anywhere in the world. Only The Islands of Bermuda can make these claims.


Bermuda is a self-governing British territory, a lone dot in the Atlantic Ocean 950 miles north of the Virgin Islands and 650 miles to the east of Cape Hatteras, North Carolina. Hamilton, the capital city of Bermuda, is home to the head offices of Markel Global Insurance and Global Reinsurance. The city is a major port, as well as the territory’s financial center. The oldest of all British colonies, Bermuda covers an area of 20.6 square miles and is located in both the northern and western hemispheres. It is comprised of 181 islands that are coral covered and lava-based.

Rainfall generates Bermuda’s primary supply of fresh water. The famous white rooftops collect the rain. The water drains to underground tanks where it is stored for everyday use, including drinking.

Cup Match at the end of July is the biggest holiday in Bermuda. It is an annual two-day cricket match between the East and West ends of the island.

The famous Bermuda shorts—worn with a jacket, tie, and knee sox—are proper island attire for business and social settings, although they have recently become less fashionable.

The unofficial name for Bermudians is Onions. Bermuda onions were once exported extensively. Bermuda is also known as “The Onion Patch.”

If you’re planning to travel to Bermuda, take note: there are no car rentals. Mopeds, buses, taxis, and ferries are the way to get around.

And do not expect any fast food. Fast food chains are not allowed! Except for KFC, who managed to get in before the ban was put into place.

What makes Bermuda’s beaches pink? Tiny, red organisms grow under coral reefs and get washed up to the beach along with bits of coral and shells, creating the pink hue.

Everything you want to know about Bermuda

Port Bermuda webcam - Cool! (Give it a minute to load.) 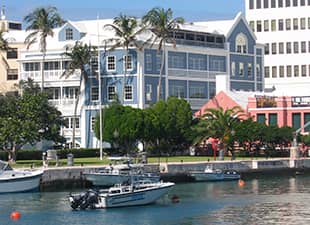 Markel House is located on the Hamilton Harbour. 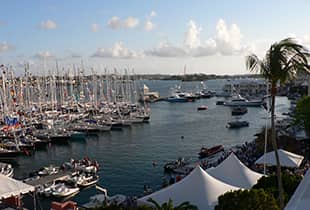 View from the Markel House veranda.