An historic, southern railroad town, Kennesaw, Georgia covers 8.5 square miles (22 km2) in the greater Atlanta metro area. With the construction of a railroad through Cobb County in the 1830s, several small towns popped up, including Big Shanty, now known as Kennesaw.

In addition to Markel’s office, you can visit the famous locomotive from the Great Locomotive Chase of April 12, 1862. During the Civil War, a locomotive named, The General, was hijacked by Andrews’ Raiders (22 Northern spies) to damage track, bridges, and telegraph wires. Chased by the conductor and his men on foot and by two other locomotives, Andrews’ Raiders eventually ran out of fuel and abandoned their mission.

Interesting facts about Kennesaw and locomotives

In 2007, Kennesaw was selected by Family Circle magazine as one of the nation's "10 best towns for families."

Kennesaw established a mandatory gun-possession ordinance in 1982 requiring all heads of a household to own a firearm and ammunition.

Visit Kennesaw for the city's annual Pigs and Peaches BBQ Festival on Friday, August 22 and Saturday, August 23, 2014. Georgia, known as "The Peach State," designated the peach as the official state fruit in 1995.

The history of Kennesaw

The Battle of Kennesaw Mountain 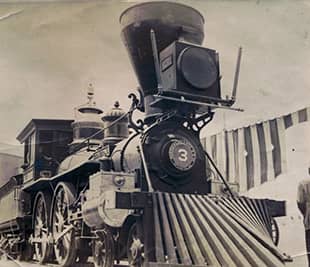 The General from the Great Locomotive Chase of April 12, 1862. Photo courtesy of Kennesaw.com.

Learn about our other locations

Markel has 60 offices located in 19 countries. Here are a few others that we've previously highlighted.