A cultural capital for the arts, theatre, history, fashion, and shopping, London is a leading, global, metropolitan city. With iconic red double-decker buses and over 7,000 pubs, it is the capital city of England and the United Kingdom. With history dating back to the Romans who named it Londinium, it is one of the world’s leading financial centers. Markel International’s head office is located in London about 1.5km or so from the Tower of London and the River Thames.

Interesting facts about London from confessedtravelholic.com

Big Ben does not refer to the clock, but actually the bell.

There are over 300 languages spoken in London.

James Bond’s code “007″ was inspired by the author Ian Fleming’s bus route from Canterbury to London.

25% of the people living in London today are born in another country.

80,000 umbrellas are expected to be lost annually in the London tube (metro).

Kate Middleton is allergic to horses.

69 fun facts about London and the UK 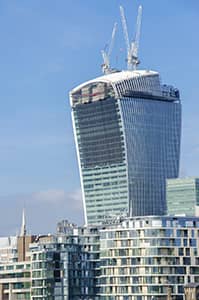 Markel International is moving to 20 Fenchurch Street. Currently under construction, this distinctive building will house a Sky Garden on the top three floors.